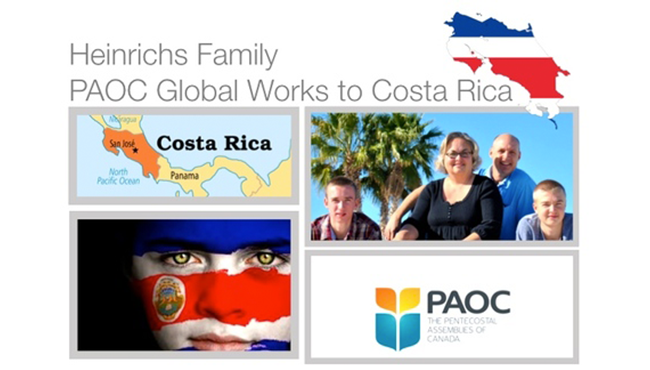 Ministry Focus: In the seven months since arriving in Costa Rica (Dec. 31, 2015), Gary and Kathy have worked to build relationships with local pastors, missionaries and local church congregations.  Their ministry goals are to reach the marginalized through local Costa Rican churches; to train, equip and encourage pastors and leaders.  They not only continue to learn Spanish, but are striving to learn local culture, along with local church and ministry culture.  In Costa Rica, they have added Indigenous people groups to their ministry, where many are open to the gospel message. Gary and Kathy hosted their first STM team from Alberta in May, and have other teams arriving in spring-summer 2017. The Heinrichs feel privileged to serve in Latin America.

The Heinrichs hosted various STM teams from the US and Canada while serving in Mexico. These teams assisted construction projects, children's programs, and ministered in the local Men and Women's Rehab Centres.

On December 31, 2015, Gary and Kathy transitioned back to San Jose, Costa Rica, where they continue this  same type of ministry, including working with Indigenous groups. The Heinrichs feel privileged to be called to minister to the people of Latin America.